It’s been 16 months since our last Irish whiskey (and that was a blend, which cost under £20). So we wanted to try something a bit different.

The oldest standard expression in the Connemara range, this fine 12 Year Old peated Irish single malt from the Cooley distillery has won several awards including a Gold medal at the San Francisco World Spirits Fair.

Nose: Lemony and fresh. Quite light, oily peat which melds with a deft touch of light apple and pear, a hint of custard, and creamy malt. Tart and peaty it’s a bit on the light side with notes of orchard fruit, honey, burnt wires and camphor. There is an underlying sweetness of vanilla and jellybeans to the nose, but it’s dominated by the heavier medicinal-industrial notes.

Palate: Sweet, fizzy almost, with rustic, earthy peat, atop rhubarb and custard sweets, cream, malt and granary toast with melted butter. Smoky too, like a driftwood on fire. The peat firms up and takes over in the flavour and the fruitiness becomes a bit more tropical in nature. Honey and vanilla are present along with a cinnamon heavy spice, dried apples and a light woody astringency. There’s some of that burnt wire / blown fuse and camphor character from the nose. The palate as a whole comes through a bit on the light side. Light body with a slick oily texture.

*Tasting notes from The Whiskey Jug, Master of Malt and Whisky Mag

Like the whisky it is a mixture of good value and eccentricity. It comes in a wooden tube, but with some of the text burned in to the wood, and the larger letters and pictures poorly stuck on, wrinkled and partly peeling off. Lid appears to be held in place with a lollipop stick. Cork stopper. 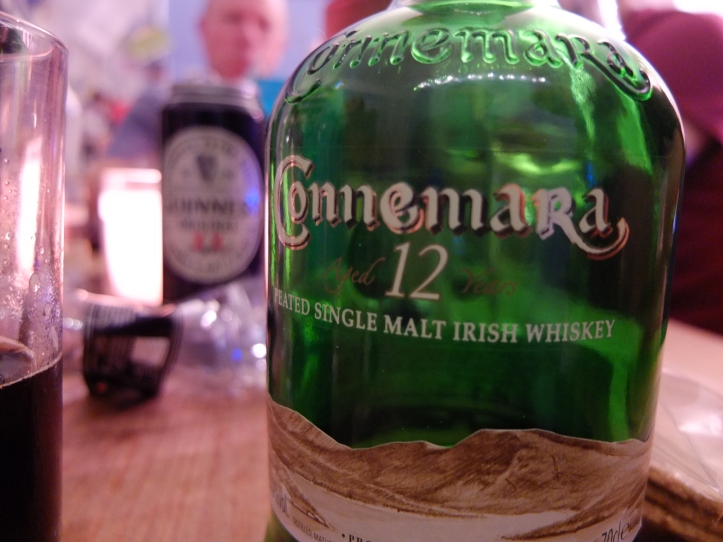 Started off a bit disappointing; not as peaty as a Laphroaig or Ardbeg, it didn’t quite live up to the fantastic reputation it has. A higher ABV would be nice.

On the whole, the tasting notes above are about right. We detected piney resin and rhubarb and custard sweets. It was a bit unusual. But we definitely warmed to it by the end of the bottle (isn’t it always the way?). On the whole the standard NAS Connemara is better value, we reckon.